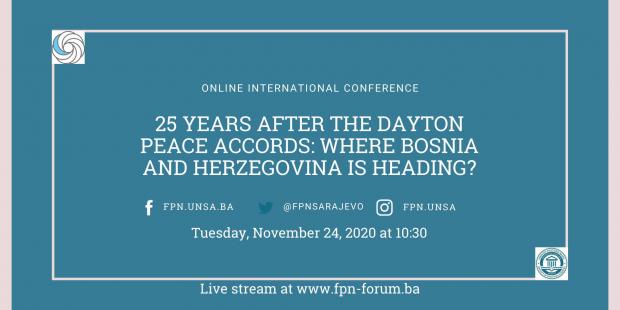 This year marks a quarter of a century since the signing of the General Framework Agreement for Peace in Bosnia and Herzegovina. The agreement reached in Dayton on November 21, 1995, and signed on December 14 of the same year in Paris, created a constitutional framework in Bosnia and Herzegovina that is still permeated by deep political and social polarization.

Although there has been talk for more than a decade about Bosnia and Herzegovina's transition from the post-Dayton to the Brussels phase, which formally began with the signing of the Stabilization and Association Agreement in 2008, the country remains crucially shaped by Annex IV of the Dayton Peace Accords (DPA), which stands as - never ratified - Constitution of Bosnia and Herzegovina. Discussions on a functional constitutional arrangement, on the one hand, and the very idea of the state, on the other, continue to shape the public space of Bosnia and Herzegovina, with many unresolved issues related to fundamental democratic values.

To gather and engage theorists and practitioners from Bosnia and Herzegovina and abroad in discussion related to this important anniversary and issues pertaining to the DPA, Bosnia and Herzegovina and the Region, as well as its future, the Faculty of Political Science, University of Sarajevo, in cooperation with the Global Campus SEE / European Regional Master's Program in Democracy and Human Rights in South East Europe (ERMA) organizes an international online conference BOSNIA AND HERZEGOVINA 25 YEARS AFTER THE DAYTON PEACE ACCORDS on November 24, 2020.

The conference will be opened at 10:30 h, with welcoming speeches by the Rector of Sarajevo University, Prof. Rifat Škrijelj and the organizers, Prof. Sead Turčalo, dean, Faculty of Political sciences and Prof. Asim Mujkić, Co-director, GCSEE/ERMA, UNSA. Audience will also be addressed with the opening speeches by H.E. Johan Sattler, Head of the Delegation of the European Union to Bosnia and Herzegovina and the European Union Special Representative, H.E. Nicola Minasi, Ambassador of the Republic of Italy to Bosnia and Herzegovina and H.E. Bisera Turković, Minister of Foreign Affairs, BiH, and the closing speech by Prof. Bruce Hitchner, Tufts University, USA, the founder and Chair of the Dayton Peace Accords Project (1998 to 2014).

The conference is organized through the four thematic panels:

For more information please see the Conference programme and the Technical instructions for attendees.

The working languages of the Conference are BCS and English. The Conference will be streamed at www.fpn-forum.ba and at the official FB page of the Faculty of Political Sciences.